It is well accepted that trade generates winners and losers. The past few decades have seen increases not just in trade in goods and services but trade in assets, as countries relax restrictions on the ability of capital to flow across national boundaries. Surprisingly, while the impact of trade in goods and services on inequality has been extensively studied, little attention has been paid to the distributional impacts of opening up capital markets. Our paper fills this gap.

Using a data set for nearly 150 countries from 1970 to 2010, we show that increases in capital account liberalization are followed by increases in inequality, as measured by the Gini coefficient. However, we also show two channels where evidence of this association is limited: First, the impact of liberalization on inequality is smaller for countries with higher levels of financial development and inclusion. Second, the impact is also smaller in cases where the liberalization is not followed by a crisis. These results are consistent with the IMF’s institutional view that “capital flow liberalization is generally more beneficial and less risky if countries have reached certain levels or thresholds of financial and institutional development.” 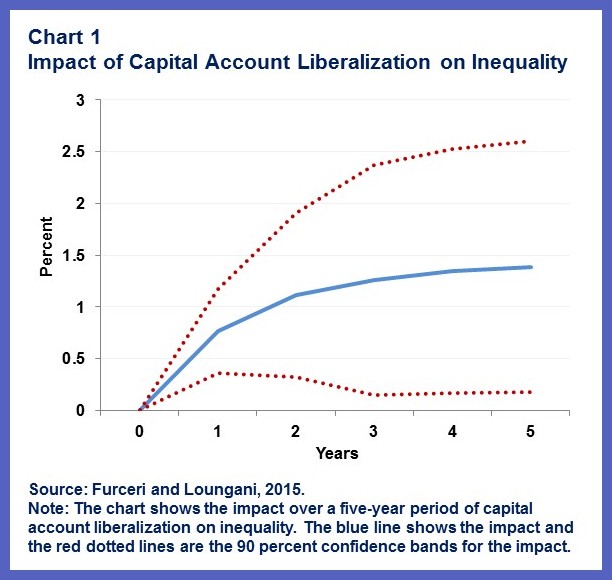 Second, when capital account liberalization is not well managed, or not well sequenced with other reforms, it increases the likelihood of financial crises. Many studies have found that such crises disproportionately hurt the poor. We find support for this view: the impact of openness on inequality is sharply higher in cases where there a financial crisis in the immediate aftermath of liberalization (Chart 3). 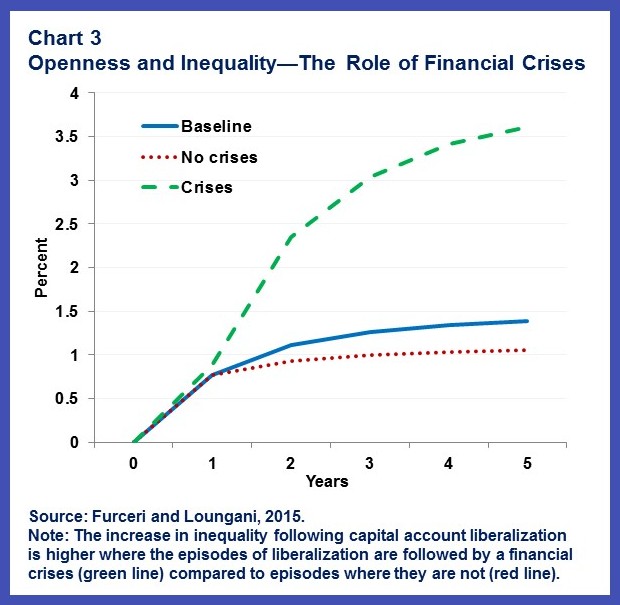 Our results do not imply that countries should not undertake capital account liberalization. As noted in “The Liberalization and Management of Capital Flows: An Institutional View” (IMF 2012):

“Capital flows can have substantial benefits for countries, including by enhancing efficiency, promoting financial sector competitiveness, and facilitating greater productive investment and consumption smoothing. At the same time, capital flows also carry risks, which can be magnified by gaps in countries’ financial and institutional infrastructure.”

Our findings, however, suggest a need for proceeding with caution, given that capital flows can be volatile and—particularly given their large size relative to domestic markets—can pose a risk to economic and financial stability. Further, countries where reducing inequality is an important policy goal may need to design liberalization in a manner that addresses its impact on inequality.

The institutional view also notes that capital flow liberalization is generally more beneficial and less risky if countries have reached certain levels or thresholds of financial and institutional development. Here again, our results are consistent with this view. Where financial inclusion is high and the liberalization well managed, the impact of liberalization on inequality is muted.

At a time when rising inequality is a source of concern to many governments, weighing the benefits of capital account liberalization against the distributional effects may be important. Awareness of these effects might lead some governments to choose to design policy actions in a way that redresses the distributional impacts.

Ensuring the Benefits of Capital Flows in the Middle East