Debt held by firms in emerging market economies in a currency other than their own poses extra complications these days. When the U.S. Fed does eventually raise interest rates, the accompanying further strengthening of the U.S. dollar will mean an emerging market’s own currency will depreciate against the higher value of the U.S. dollar, and would make it increasingly difficult for firms to service their foreign currency-denominated debts if they have not been properly hedged.

In the latest Global Financial Stability Report, we find that firms in emerging markets that have increased their debt-to-assets ratios have generally also increased their overall sensitivity to changes in the exchange rate—commonly called exchange-rate exposure.

We measure this by estimating firms’ exposure indirectly, based on the reaction of their stock returns to changes in the exchange rate. This estimate of foreign exchange exposure in principle accounts for financial hedges, such as swaps, and natural hedges, such as export-oriented firms’ receipts in a currency other than their own, as well as local market conditions. We estimated these foreign-exchange exposures using data from thousands of individual publicly-listed firms. Estimating these exposures is advantageous because firm-level data on foreign currency holdings are generally unavailable.

Bonds do not tell the whole story

The evolution of foreign exchange exposures after the global financial crisis also differs across regions (Chart 2). For instance, foreign currency exposures appear to have risen the most in Latin America, on average, after the crisis.

Furthermore, outside of Asia—Europe, the Middle East, Africa and Latin America—the fraction of firms with positive foreign exchange exposures increased across all sectors from  2010 to 2014 (Chart 3). 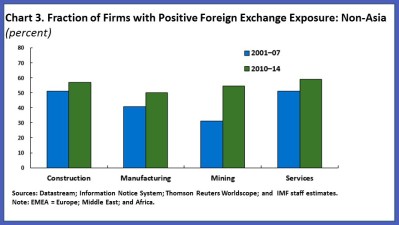 Interestingly, the construction sector, where this ratio grew rapidly, is among the sectors perceived by stock markets as having strongly increased its exposure to exchange rate fluctuations since the crisis. These findings suggest that emerging markets must prepare for the implications of a continued appreciation of the U.S. dollar as the U.S. Fed begins to normalize monetary policy.

For Home Prices in London, Check the Tokyo Listings

Chart of the Week: Brexit and The City